As a result of the analysis and recommendations of the Accounting and Auditing Report on the Observance of Standards and Codes (A&A ROSC) in Moldova, which was published in June 2004, the Government of Moldova adopted a Country Strategy and Action Plan to strengthen corporate financial reporting in December 2008. As part of their work to implement this plan, the Moldovan authorities wished to learn from the experience of other countries, particularly the new EU member states, in setting up and operating a system of financial reporting which complies with EU directives and standards.

The Moldovan authorities approached the World Bank for assistance and the Bank’s Centre for Financial Reporting Reform (CFRR) set up a program using the facility of the South-South Experience Trust Fund (SEETF) for policy-makers and practitioners in Moldova to benefit from the lesson learned in several countries which had recently joined the EU or had fulfilled the EU’s requirements in accounting and auditing as part of negotiations to join the EU.

The Program’s objective was to allow the Moldovan authorities to learn from experiences in other countries, particularly new EU member states such as Slovenia, Slovakia and Estonia, and other South-East European countries such as Croatia which have completed their accession negotiations with the EU in the field of accounting and auditing in the following areas:

In each of these areas, teams of specialists from Moldova participated in a range of study visits to partner countries to learn how their opposite numbers had dealt with these issues. Study visits were made to Estonia (November 2009), Croatia (February 2010), the Czech Republic (February 2010) and Slovakia (March-April 2010). In addition, a video conference was held with the Slovenian Institute of Auditors in January 2010.

The lessons learned during the visits were then disseminated more widely among interested parties in Moldova through a series of local workshops between December 2009 and May 2010. Policy notes on how the experience gained in the study visits could be used in Moldova were prepared for each of the five main areas of the program and were discussed with local stakeholders at these workshops.

The final event of the program was an international workshop on financial reporting regulation held in May 27-28 2010 in Chisinau, Moldova and attended by a wide range of interested specialists from Moldova, the partner countries involved in the program and representatives from the European Commission and accounting experts from the International Accounting Standards Board (IASB) and European Financial Reporting Advisory Group (EFRAG).

The Moldovan participants gained valuable insights into the problems faced by other countries in implementing the EU acquis on accounting and auditing. As a result of the program, the Moldovan side obtained a better understanding of challenges and defined some policies to achieve the aim of setting up and operating a modern system of financial reporting which is aligned with EU requirements (see Annex 1 of the SEETF final report).

However, implementing these recommendations will take further effort and is likely to require the creation of a broad consensus within the country for the required changes. The CFRR stands ready, if asked, to assist Moldova in its next steps in implementing the process of reform of accounting and auditing. 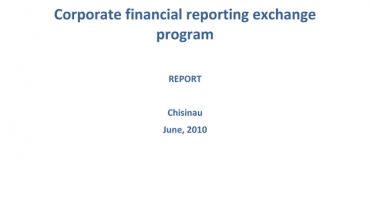